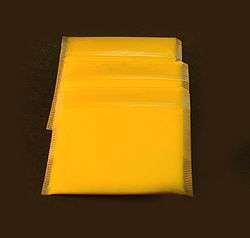 American cheese is a type of processed cheese. It can be orange, yellow, or white in color, is mild, salty, and faintly sweet in flavor, has a medium-firm consistency, and has a very low melting point.

Very early in its history, American cheese was only white in color—as it was made from a blend of cheeses (most often including cheddar cheese) which were originally only white. However, the later versions are often a yellow hue due to the addition of annatto, a sweet and nutty seasoning added to cheddar and to colby so that by the late 1800s American cheese was often simply called "yellow cheese."

Today’s American cheese is, by law, required to be manufactured from at least 2 types of cheese. Because its manufacturing process differs from "unprocessed"/raw/natural cheeses, American cheese can not be legally sold under the name (authentic) "cheese" in the US. Instead, federal (and even some state) laws mandate that it be labeled as "processed cheese" if simply made from combining more than one cheese, or "cheese food" if dairy ingredients such as cream, milk, skim milk, buttermilk, cheese whey, or albumin from cheese whey are added. As a result, sometimes even the word "cheese" is absent, altogether, from the product's labeling in favor of, e.g., "American slices" or "American singles". In the United Kingdom, packs of individually wrapped slices are labeled as "singles", although they are commonly referred to as "cheese slices". 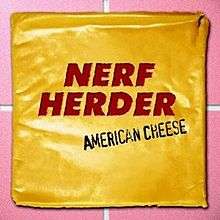 American Cheese is the third album by Nerf Herder, released in 2002.

All songs written by Parry Gripp, except where indicated.

A track that didn't make it on to the album called "Bark for the bone" was released via Parry Gripp's website as an MP3. In the file info under album it states - "Completly Unauthorized American Cheese Left Over".